Across the nation, utilities, energy markets, states and regional energy providers are moving beyond their historic territories and borders to meet new supply and demand challenges—challenges that include managing the shift to less expensive natural gas and low-cost renewables, and complying with aggressive carbon reduction policies.

Restructuring and expanding makes sense. By growing their footprints and increasing the availability of energy resources, these enhanced grids could serve as cost-effective ways to integrate renewables by “spreading out the variability and tapping the best resources, as well as a way to capture operating efficiencies.” This was one of the conclusions drawn at the 2016 Stakeholder Symposium on regionalization held by the California Independent System Operator (CAISO), the nonprofit independent system operator (ISO) that serves the state of California.

The need to share resources in order to balance the grid is felt most urgently in California, which now produces more solar power than it can use. In 2014, CAISO launched the Western Energy Imbalance Market (EIM), a real-time wholesale energy market designed to enable member utilities to buy and sell energy resources to satisfy demand in real time. The EIM has enhanced grid reliability and generated $88 million in savings since its inception. 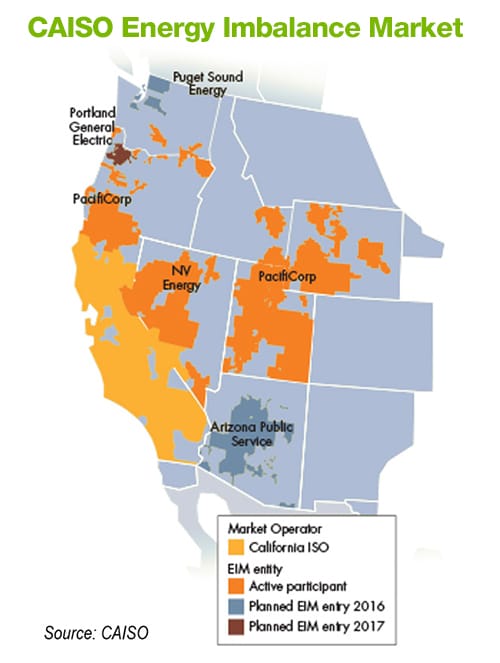 By expanding the footprint of the Western EIM even farther, the state could export excess renewable power to meet load demand in neighboring states and, in turn, California could purchase wind from Wyoming when the sun is not shining. California, as a result, would be able to rely increasingly on renewables, thereby lowering costs for customers throughout the region.

The concept of regionalization isn’t new. For many years, regional transmission organizations (RTOs), or ISOs, have managed large regional sections of the U.S. electrical system.

CAISO—currently a system spanning 26,000 miles of transmission for the state of California—manages the flow of electricity for most (80%) of the state. It is the largest of 38 individual balancing area authorities in the western region. With the proposed expansion, the nonprofit CAISO would be restructured and merge with PacifiCorp, a for-profit utility in Oregon, to create a new regional entity that would serve more than six western states.

The most obvious potential benefit of an expanded regional grid, according to CAISO CEO Keith Casey, will be its ability to “access the untapped flexibility and diversity of resources throughout the West.” Other benefits include an estimated cost savings for customers of up to $9 billion in the first two years and the creation of up to 19,400 jobs throughout the western region by 2030. The state would also be in a position to generate half of its electricity from renewable sources—and achieve an emissions reduction of up to 10 percent—by 2030.

However, CAISO’s plans for expanding the Western EIM were put on hold last summer by Governor Brown and, with a new administration, the future of the expanded regional market remains to be seen.

Southwest Power Pool (SPP), another regional power grid operator, serves parts of 14 states in the central United States. Having been granted Regional Transmission Organization (RTO) status from the Federal Energy Regulatory Commission (FERC) in 2004, SPP now boasts a larger footprint that enables it to increase integration of renewables, while it “brings other resources to bear against the variability of wind,” according to Nick Brown, CEO of SPP. Currently, SPP’s footprint includes more than 12.5 GW of wind capacity. 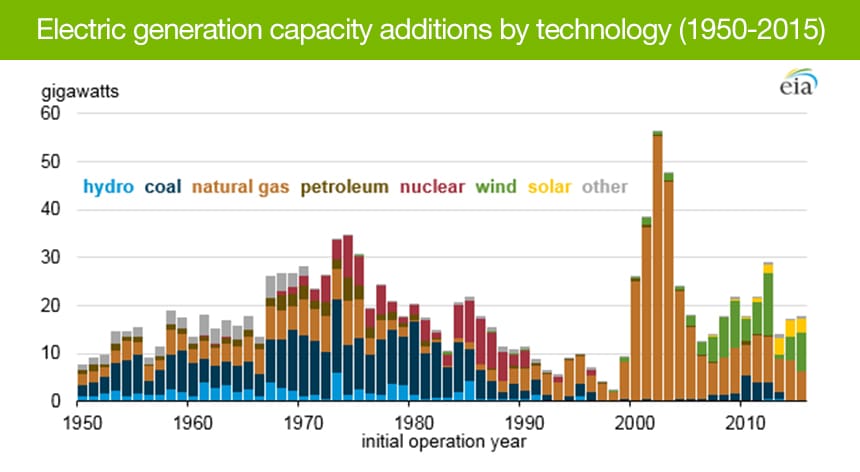 The new Trump administration is already affecting regionalization plans in progress in California, with California Governor Jerry Brown acknowledging that regionalization in his state is “complicated because of the different policies” of the president.

As for the rest of the country, the future is still unclear and the new administration’s approach to renewable energy sources is uncertain. “We’re really in early days with so many unanswered questions,” says Ethan Ziendler, head of Americas and Policy, Bloomberg New Energy Finance. Yet, it seems, the momentum towards a future that incorporates a higher level of renewables will be impossible to stop. “Both Trump and whoever else would have won are being pushed around by structural and market forces,” says Robert McNally, a former energy advisor to George W. Bush.

Clearly, the United States is moving to a power mix that includes more renewable resources and transitioning to this new scenario will require more flexible generation and transmission. That means energy providers will need to take a new look at their resource plans. A recent report by Brattle Group, a consulting firm that works with industry stakeholders to help them facilitate the growing use of renewable energy resources, underscored the urgency of the need for planning. The report demands that  “[t]he time is now to undertake a proactive, scenario-based transmission planning effort to ensure the grid can meet the challenges of a rapidly evolving generation fleet while capturing significant cost savings for customers.”

For the U.S. utility, the challenge will be to come to grips with its new roles—to manage the transition from building, owning and operating its transmission assets to identifying and developing the business model that makes the most sense for serving its markets and customers moving forward (e.g., developer, asset operator or transmission asset owner). When determining that business model, utilities will need to consider whether they have the capabilities to support a transmission business and whether they plan to maintain or expand their current footprints.