2016 marked the first year ever that solar generation topped all other fuel types in new capacity additions. That figure comes from two leading research entities in the cleantech market: GTM Research and the Solar Energy Industries Association.

Granted, data from the Energy Information Administration places solar production at only about two percent of the U.S. total. But, given a growth rate that GTM pegged at 95 percent in 2016—combined with forecasts for more growth ahead—it’s it fair to say that two-way power flows will continue to be a challenge utilities must meet.

It’s also surmountable. “I have worked with utilities that have upgraded their systems to allow reverse power flow, and it worked perfectly,” says Soorya Kuloor, Chief Technology Officer for Landis+Gyr’s Advanced Grid Analytics group. According to Kuloor, smart planning—combined with smarter grid devices and local control—can keep electrons moving safely no matter what direction they want to travel.

Look both ways at the intersection

What kind of troubles can two-way power flows create? “The wires of the distribution system have no problem with reverse power flow,” Kuloor says. Devices on the grid, however, might.

In the old days, when power companies were the only generators in town, control devices like regulators, capacitors or relays were designed to assume that power flowed in only one direction. “If they saw power flowing in the other direction, they typically tripped or misbehaved, causing customer outages or power quality issues,” Kuloor says. This tendency has prompted many utilities to update such equipment with reverse-power-flow logic or, in the case of mechanical devices that have no software, replace devices altogether.

But simply changing out technology may not be enough, Kuloor maintains. “What the utility needs to do is leverage software that allows for visualization and what-if analysis,” he says. Such software enables engineers to simulate possible scenarios that might occur and factor in various conditions. These include levels of customer-sited generation on the feeder, where it is in relation to control devices, the capabilities of those relays and what kind of impact customer PV might have on the system.

Voltage excursions are one such impact many utilities now are addressing. At the point of interconnection, PV tends to bring voltage up. But, “intermittency is a problem,” says Kuloor. When clouds decrease PV output, voltage drops. This causes voltage flickers and fluctuations at customer locations.

What’s more, because voltage is localized–often varying on a neighborhood-by-neighborhood basis ­– control devices can wind up working at cross purposes. One utility speaker at the recent DistribuTECH 2017 conference admitted that tap changers and voltage regulators on his system sometimes worked against each other. Because of the local nature of voltage, at times one control device might be working to bring voltage up, while the other was working to bring it down.

Kuloor is a fan of smart inverters, the devices that convert direct current from a PV panel or battery into alternating current, which is what flows on the grid. 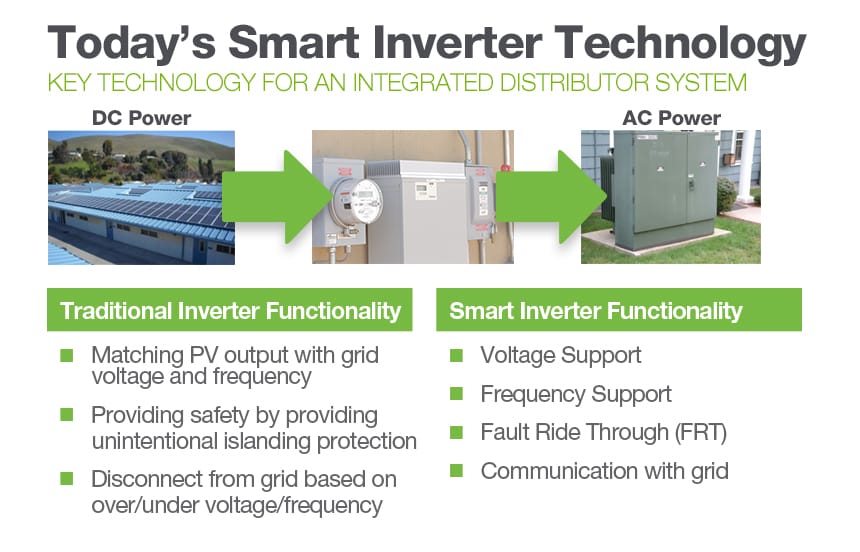 There are multiple reasons to want inverters that are smart, which means they have intelligence and communications capabilities built in. Here are two of them: First, smart inverters trip off the PV they’re attached to in the event of grid instability or power outage, thereby acting as a protection against two-way power flows on a feeder has been de-energized on the utility side to protect line workers.

Smart inverters also have frequency and voltage sensing mechanisms that allow them to detect grid abnormalities, and they can synthesize reactive power, which is what utilities use to control voltage. Reactive power—a.k.a. volt amperes reactive or VARs—is alternating current with a wave that is slightly out of sync with the voltage wave. If the VARs have leading current, they bring voltage up. If they lag, they bring it down.

Places with high penetration of PV—such as Germany and California—mandate smart inverters for solar installations. Although smart inverters can be configured by utilities to operate autonomously without any control signal from the distribution system operator, they also can be managed to maintain grid reliability.

That’s what’s happening in the Grand Canyon State, where Arizona Public Service (APS) has been working with the Electric Power Research Institute (EPRI) to see how grid-supportive technologies like smart inverters can mitigate problems presented by solar PV. To that end, APS and EPRI have power-quality monitors reporting circuit behavior in 1-second and 1-minute intervals along six feeders.

These feeders serve some 14,000 APS customers and host approximately 2,400 customer-owned PV systems, as well as 200 PV installations owned by the utility itself. Elsewhere on the APS distribution system, there are an additional 1,400 household solar installations that the utility owns and pays customers $30 monthly to lease a bit of their rooftop real estate. These PV systems have smart inverters, which APS directs via a centralized system.

APS is the first utility in the nation to deploy and control advanced inverter technology remotely. It enables the utility to operate the solar installations as they would a power plant, ramping up or curtailing power based on customers’ real-time energy needs. 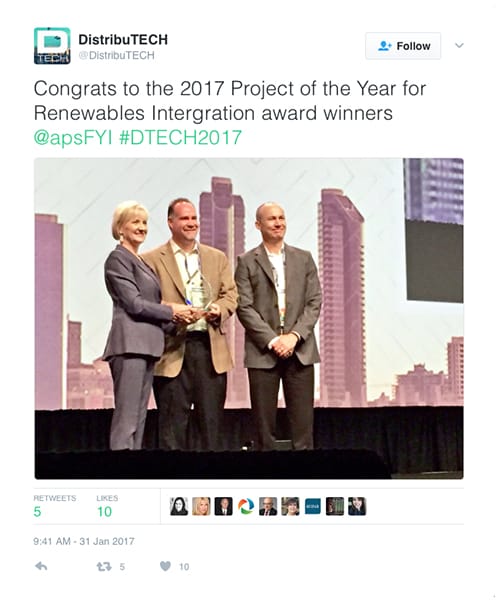 Although the research is slated to continue through Oct. 2017, initial findings verify that smart inverters can support grid operators in response to daily communications with little impact on solar PV production. The research earned APS DistribuTECH 2017’s Renewable Integration Project of the Year award.

Smart inverters are valuable because they put intelligence and control mechanism at the grid edge. They’re also connected to the source of potential power-quality problems: the PV itself.

Battery storage is another local mechanism that can address intermittency of any distributed generation, especially solar and wind. A battery can be charged during periods of excessive generation to reduce reverse flows, and can be discharged during low- or no-generation periods to provide a flatter consumption profile. Similar to solar PV, batteries with smart inverters can be configured to provide VARs and voltage compensation to the distribution system. In fact, battery-backed solar PVs with smart inverters are now being tested by multiple utility projects for their effectiveness.

Like smart inverters, battery energy storage can be located near distributed generation, enabling it to respond quickly to changing grid and generator conditions.

“Bad things happen in sub-seconds, so generally anything that is controlled remotely is too slow,” Kuloor says. “Intelligence has to be local. That will solve significant issues from intermittent generation and generation on the customer side of the meter.”