Research conducted by Shelton Group, a marketing firm that specializes in motivating sustainable choices, shows that when it comes to energy efficiency, most of us are a pretty self-satisfied bunch. According to Shelton Group’s 2016 Energy Pulse survey of more than 2,000 people in the U.S., 79 percent of business respondents and 47 percent of consumers think they’re already living efficient lives.

Businesses have something to crow about. A recent survey conducted by Johnson Controls, a company that makes building efficiency systems, found that 56 percent of respondents had made some kind of energy efficiency investment. Nearly three-quarters had put money into more efficient lighting, while some 33 percent made investments related to heating and cooling.

But those efforts don’t touch plug and process loads, which according to the U.S. Department of Energy accounts for as much as 33 percent of the average commercial building’s electricity use. The National Renewable Energy Lab (NREL) created a how-to on reducing plug and process loads, and one of the crucial steps is developing a metering plan to precisely measure actual energy use.

Noting that several manufacturers produce plug meters, the NREL document advises that such meters should be able to record and log data for at least a week, sample energy use as frequently as every 30 seconds, meter loads up to 1,800 watts and conform to Underwriters Laboratories certification. 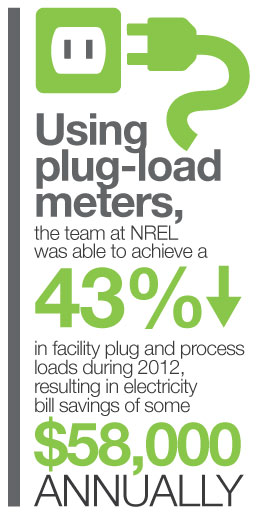 In 2014, PNC Financial Services Group teamed up with Carnegie Mellon University to see if devices that measure plug load and offer control options could reduce energy consumption among employees in a Pittsburgh office. The research project put devices in 80 employee workstations, and researchers divided those workers into four groups.

Group one knew there was a device monitoring their energy use, but that was all the information they received. Group two got to see their energy use in real time via a dashboard they could access on their computers. Group three got that dashboard view, as well as the capability to shut off the office machinery they had plugged into their plug-load meter. Group four also could turn things on and off based on what they saw on their dashboards. In addition, they could automate the on-off controls.

The result: All of the groups cut energy use. Those who knew they were being monitored cut electricity use 7 percent. Employees who saw their own energy use saved 13 percent. Adding switchboard control to the energy-use knowledge enabled group three to reduce consumption 25 percent. But automation was the big winner. Employees who had displays to give them knowledge as well as automated controls slashed their energy consumption 38 percent.

Using plug-load meters, the team at NREL was able to achieve a 43 percent reduction in facility plug and process loads during 2012, resulting in electricity bill savings of some $58,000 annually.

Given that Shelton Group researchers found some 10 percent of survey respondents had done nothing to reduce energy use in 2016, maybe running over to Home Depot for a plug-load monitor would be a good first step in raising awareness and shutting down unnecessary electricity consumption.